September 18 was the close of my company’s 2025 Customer Challenge, and I got my idea submitted right before the deadline:  Algorithmic Business Development Utilizing Intelligent Agents

The premise of the innovation challenge was about customer needs in the year 2025:

How can [we] adapt and grow to meet the needs of our customers in 2025?
What are the products, services and capabilities that these business professionals will expect in the future?

The Sign Up and Register page required me to provide a team name and a logo; so I went for Clippy. 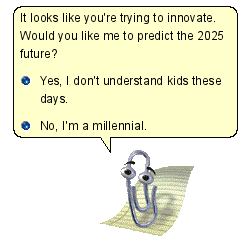 When thinking of what technologies would be there in 2025 (10 years into the future), I started wondering what “staples” of technology were not around 10 years ago.  Below is a partial list I constructed.

Building this list helped me brainstorm on ideas that felt worthy of 2025 needs vs. something we could deliver in the next couple of years (or even today).  Will this push my idea to the top of the list?  I will just have to wait and see.